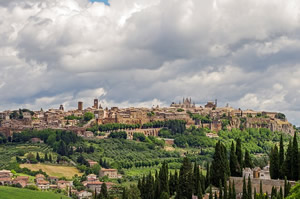 On Ciao Amici’s Central Italy trip I take you to the Umbria Region, known as the green heart of Italy. It is called this because it is centrally located in the shape of the boot of Italy and has beautiful lush green rolling hills. It is also often called the poor cousin of Tuscany.   I think though that it should be renamed to the Princess of Tuscany with Tuscany being the queen.  Both regions are similar in their green hilltops and vast fields of vineyards, and are equally beautiful.   While Umbria has many wonderful qualities, Tuscany will always be known as the more popular region with travelers.

When I first began to plan this trip the best thing that I did was to rent a car because I was able to drive from town to town.   Most of them are fairly close together, with in an hour to an hour and half drive.  The Umbria region is very small so when you are on the highway you can see each hilltop town as you drive by but you don’t get the true feel of the region.  By traveling by car I was able to get the true feel of each town as I went through.

On our way to Perugia we stopped in a town called Spello known for its flowers.   When I tell you there were flowers EVERYWHERE that is not an understatement.  I can’t even describe how many flowers there were, flowers on the stores, flowers on the balconies, flowers in the streets.  In order to get into Spello you can’t bring a car so we had to park and then walk through these huge ancient doors.   Stepping thru the doors gave you the feeling of stepping into the Alice in Wonderland Story.  You are walking thru these narrow streets all covered in flowers, the beauty was amazing. They were having a festival called the Infiorata where artwork in the streets are made of flowers. I have seen this in other towns, even my own, on one or two streets, but in Spello it was done on so many streets I couldn’t believe it. It was breathtaking.

We went onto Perugia, a town that marries the old with the new.   In some parts of the city you fell as if you are stepping into medieval times.  When we arrived a medieval festival was going on where they not only had a huge parade but also sold medieval food and trinkets.   There are medieval walls that surround the old city and you definitely feel like you have travelled back in time. It also has one of the most well preserved underground cities that is still in use today.  You have to pass thru this ancient underground city to get to the subway, walking in the same places that people did years ago.    It’s an amazing thing to think about.

Then there is the modern part of Perugia that has modern museums and many cafes and bars frequented by the students of Perugia University. Perugia is also know for the famous Baci (kiss) candy manufactured by Perugina. It’s interesting that this chocolate candy was created by the first successful Italian business woman, Louisa Spagnola, in 1922. We took a tour of the Perugina factory and were able to see how these little hazelnut candies were made.  Louisa was ahead of her time and Perugina was the first factory in Italy to offer daycare for the moms while they were working and a place for them to come and breastfeed their babies when they needed to.

The whole area of Umbria is known as the region of the Monks and has many interesting things to purchase. Nocino is a famous liquor that is made with hazelnuts, and the prosciutto and salami’s of Norcia are like no other. Olive oil is also sold everywhere in Umbria since they are the second largest producer of olive oil, second to Puglia.  Of course both regions say that their olive oil is the best, one day we’ll have to do a taste test. Beautiful painted pottery can be found in the little town of Deruta. They have been painting pottery here since the 14th century and it seems like this little town produces so much pottery because of their abundance of clay in the earth. There are over 300 ceramic stores to visit there.

The last town we visited in the Umbria region was Assisi. Assisi is famous because it is the home town of the Patron Saint of Italy, St. Francis. On our way we stopped to see Porziuncola, a very small church within a Basilica. Porziuncola is said to be where St. Francis began his mission. And in order to preserve this little chapel the huge Basilica of Santa Maria degli Angeli was built over it. There were doves all around the outside of the Basilica and it gave it such a spiritual feeling. It is like nothing I have ever seen before.

Of course while we were there we had to see the beautiful Basilica of St. Francis. St. Francis was born in Assisi to a wealthy family and sold all of his possessions to begin his work as a missionary. He is buried in a crypt below the Basilica and the massive monastery is beautiful.   After our tour someone had given me a recommendation for a restaurant right across the street. When I got there I was a little annoyed because the restaurant seemed very touristy. But this is where I had the best lasagna I have ever eaten, Lasagna con fiori di zucca e besciamella.  And the people at the restaurant couldn’t have been nicer. So I guess as the saying goes “never judge a book by its cover.” Until I can take you there to try it yourself I have included the recipe here for you to try. 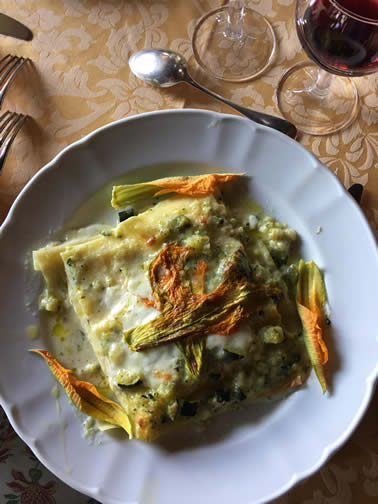