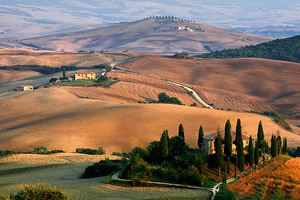 When people come to me to plan their vacations in Italy, they usually want to travel to Florence and Tuscany (the most popular region in Italy).

When people told me this, I was very confused because Florence is the capital of Tuscany, so I didn’t understand why people were referring to them as two separate places. Later, I released that non – Italians view Tuscany as the countryside, a place where there is only rolling hills, and delicious wine.

Florence, on the other hand, is viewed as a renaissance city, very different from the countryside of Tuscany that they imagine. So I decided to go to Tuscany as my second stop in my Central Italy Trip. There in my stay in Tuscany, I chose not to follow the well known tourist attractions, but to go a different route. On my search to find beautiful, but not well known areas, I discovered a hidden gem, Val D’Orcia, an area in southern Tuscany. Visiting the towns in Val D’Orcia, like Pienza, Montalcino, San Gimignano and San Quirico d’Orcia, was like being transported back to a medieval time period. If you ever find yourself in Tuscany, and you want to visit Val D’Orcia, you should start your tour from the city of Siena, where you can enjoy the Palio (a medieval horse race). Next you should head south towards the countryside, and go down the Via Fracigena. An ancient road that goes from France to Rome and ends Puglia, where boats would take pilgrims to the holy lands. Going down Via Fracigena, the Tuscan countryside shows just how breathtakingly beautiful it can be. Rows of yellow sunflowers, clear blue skies, and roads that find themselves surrounded by golden grain and green Cypress plants, combine to make the views perfect. Another unique feature that left an impact on me was the Cypress trees. These trees have been an inspiration for countless artists and filmmakers. No doubt that those trees are one of the reasons that many people want to move to Tuscany.

Val D’Orcia also has to offer natural hot springs. These springs are sought after by people from all over the world because of their healing and relaxation properties. They were used as a natural spa to the ancient Romans and Etruscans. One of the towns that have these natural springs is called Bagno Vignoni.
But the views and springs are not the only thing Tuscany has to offer. Tuscany has world class oils, cheeses, meats, wines, truffles, saffron, etc. The most famous dishes in Tuscany are, bistecca fiorentina, panzanella, ribollita. For dessert, you should try cantucci, brigidini e panforte. Tuscany represents everything good about Italy: beautiful views, delicious food and rich culture.

Mix all the ingredients together and enjoy!
Buon Appetito!